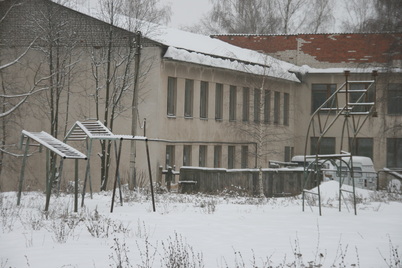 Local public school grades K-11 in the town of Suzdal, Russia.
Current alcoholism rates in Russia  are among the highest in the world.   According to the World Health Organization (WHO), Russians of age 16 and older consume roughly 4 gallons of pure alcohol per capita annually, almost twice the amount of the average American.  Moreover, over 10 million Russian children between the ages of 10 and 14 consumer alcohol regularly.  In schools like Suzdal's, which has roughly 500 students ranging in age from 4 to 16, alcohol consumption has led to poor student performance, decreased attendance rates, and significantly reduced graduation rates.  Sadly, it is not uncommon to see students as young as 11 years old consuming alcohol in Russia.

Alcoholism is not only destroying childhood and educational opportunities for Russian children, it is vastly deteriorating the quality and expectancy of life for all Russian citizens.  Male life expectancy in Russia is a mere 59 years, similar to that of Haiti and Myanmar, and nearly 500,000 Russians die annually from alcohol related crimes, accidents and illnesses.  Overall, more than 20% of male deaths in Russia are attributed to alcoholism.  In Suzdal, where the problem is particularly acute, a 15 year old boy has a 40% chance of dying before the age of 60 in an incident associated with excessive alcohol consumption.

The high level of alcohol consumption in Russia has recently been accompanied by equally staggering levels of drug use and abortion rates.  Since 1990, illegal drug use has increased more than tenfold.  The use of opiates among Russians is the highest in the world at nearly 8 times the average of western nations.  Abortion rates have also become an issue of great concern in Russia over the past decade.  A 2004 BBC article reported that, on average, Russia experienced 13 abortions for every 10 births.  In all, 1.6 million abortions occurred in 2004 versus only 1.5 million births.  In more rural areas of Russia, teenage pregnancy and abortion are constant, pressing implications of far greater societal flaws and a general lack of information.